The defintion of mobbing at workplaces

Psychological terror or mobbing in working life involves hostile and unethical communication which is directed in a systematic manner by one or more individuals, mainly toward one individual, who, due to mobbing, is pushed into a helpless and defenseless position and held there by means of continuing mobbing activities. These actions occur on a very frequent basis (statistical definition: at least once a week) and over a long period of time (statistical definition: at least six months´ duration). Because of the high frequency and long duration of hostile behavior, this maltreatment results in considerable mental, psychosomatic and social misery. 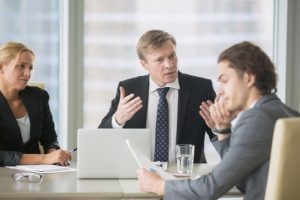 Thus, the definition does not focus too much on the activities themselves, but rather on the heavy mental strain. The origin of this focus on psychological situations in the workplace is found in medical stress research:

The researcher attempts to reveal, when a workplace stressor is likely to injure the individual, causing him or her to go on sick leave. The empirical research on mobbing in the workplace has revealed psychosocial stressors that cause extreme impact on the health of the victim, as can be observed by studying the course-of-mobbing sequences.

The definition excludes temporary conflicts and focuses on the breaking point where the psychosocial situation begins to result in psychiatrically or psychosomatically pathological conditions such as PTSD. In other words, the distinction between ”conflict” and ”mobbing”, to emphasize the concept again, does not focus on what is done or how it is done, but rather on the frequency and duration of whatever is done.