The identification of hostile activities resulted in an understanding of the structure of the mobbing process. It then became apparent that these activities, although they were negatively used in such cases, did not always in themselves, have a purely negative character. They consisted to a great extent of quite normal interactive behaviors.

However, used frequently and over a long period of time in order to harass, their content and meaning changes, consequently turning into dangerous communicative weapons . The systematic use of hostile activities in this type of interaction triggers the development of a very stereotypical course in the mobbing process. 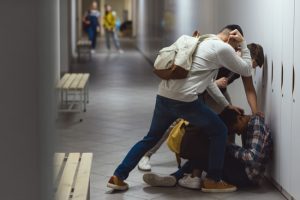 Because of this conceptualization, a typology of activities could be developed and subdivided into five categories depending on the effects they have on the victim. The following shows the results of informal interviews and heuristic analyses:

In all, 45 different activities used during a mobbing process were identified (see the LIPT questionnaire and also Leymann, 1992b and 1993b). The list of items has been statistically analyzed using factor analyses (Niedl, 1995; but also Zapf et al., 1996) leading to similar categories. If you wish to read more about scientific findings as well as other literature about mobbning we recommend you look at our selection of literature.

It must, nevertheless, be emphasized, that these activities mainly describe hostile interactions as they are carried out in northern European countries (Leymann, 1991a). Studies carried out in Austria (Niedl 1995) support an earlier hypothesis that still other behaviors may be used in other cultures, while some of those from the northern European culture may not be used at all. Knorz and Zapf (1996) published a number of other behaviors found in the southern part of Germany using qualitative interviews.

Eventually a questionnaire was developed and tested (LIPT-questionnaire: Leymann Inventory of Psychological Terror). It has been used in all studies mentioned above, with the exception of the Norwegian studies, which used a different investigative method.

If you did not find the answer to your question here, we suggest you read the frequently asked questions. There you will find a selection of the most relevant questions asked to Dr. Leymann.